The Chicken Level is a secret area in the Utraean Peninsula, the multiplayer world in Dungeon Siege. 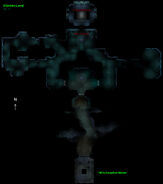 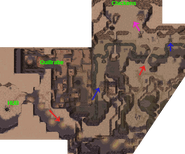 Quillrabe Canyons entry point
Add a photo to this gallery

The Chicken Level is an easter egg to reward your completion of the Utraean Peninsula Campaign and to give determined players something further to go for. The area's lore-friendly name is the "Trial of Gallus." A multiplayer session aimed at clearing the dungeon is often called a chicken run.

While the dungeon can be conquered alone, bringing help is advised. The inhabitants are exceedingly durable and dangerous. The Gallus trial is a fantastically rich source of rares, uniques, and multiplayer-only sets.

Three items are required to enter the level:

This lorebook is lying on the ground in the Utraean sanctuary at the very end of the Peninsula's main Utraean Circle quest, so obtaining it requires gathering all the Townstones first.

The book's text hints as to the other keys and elements of the level:

Climb to the sky on the sunbaked mesa.
Give to the moon with the treble stones
Place down the eye of the crystal temple
Gift of steel from a virgin hand.
The final piece is within your grasp.
A leap of faith convenes his trial.

This is a generic collectible object hidden in the single player campaign, Ehb. The location can be approached in single player or multiplayer mode.

Merchants never stock copies of the newbie knife, and nor can any monsters in the campaign settings drop one. Some methods of getting one:

From Quillrabe, follow the canyon floor and river back in the direction of Crystwind (blue arrows, pictured). Do what the legionnaire guard says not to do and climb, via the elevators, "to the sky on the sunbaked mesa."

Or from the HUB, leave along the path as if to Hiroth, but hang north across the first rock bridge (red arrows, pictured).

BUG: Sometimes, simply loading up a new game, starting from Quillrabe, and running to the entrance is enough for it to open, even without fulfilling the Trial of Gallus requirement.

Most of the foes are grouped in threes and fours. Players will generally want to peel away and engage as few chickens at a time as they can manage. Thanks to the absurd health ratings in this dungeon the battles can last a long time, so be patient.

The health-balancing spells prevent any one party member from taking massive, hard-to-manage damage spikes in this area.

The Invisibility and Respite spells introduced in Legends of Aranna (and therefore after this area was designed) open up new possibilities for mages to herd the chickens together and blow them all up at once. Many spells do not break invisibility if targeted at the floor.

This area is known, if not for having the very highest treasure content in the game, being at least close to it and tons of rares and uniques. The differences in scale and difficulty between the Normal, Veteran, and Elite versions of this dungeon are small.

Retrieved from "https://dungeonsiege.fandom.com/wiki/Chicken_Level?oldid=8436"
Community content is available under CC-BY-SA unless otherwise noted.