Despite how simple and solid the Dungeon Siege Engine is, a variety of glitches can occur through player interactive and non-interactive events.

Unknown whether a glitch or not. If you cast Firespray at the ground, all the shots are grouped in one concentrated blast. If casted to impact on the opposite side an enemy from you, massive damage will be inflicted from the spell.

This spell, when casted, makes an enemy explode when killed with a melee weapon. On Veteran difficulty or higher on the Utraean Isles, enemies killed by a Death Blast-equipped character have a chance of dropping weapons they normally shouldn't. The equipment dropped is named with item codes, cementing the fact that it is not an easter egg, and in fact a glitch. Dropped items include: the melee weapons of Zaurask, Great Clock Goblins, and Shadowjumper minions; and the fireball spells of the Zaurask, Hassat, and Droc.

This spell is supposed to share 50% of damage dealt to the caster with all nearby party members. In multiplayer, however, the spell makes the caster invincible, and other players take the normal 50%.

This spell is locked at it's level one HP-Damage ratio, despite clear evidence in the engine code of it being a semi-powerful endgame spell. It was not fixed in any subsequent updates or the Legends Of Aranna expansion pack.

This glitch makes one creature inherit the texture of another one.

When a player stuns an enemy with magic or weapons, and then stuns another enemy before the stun has worn off the first enemy, the skin texture of the second enemy can be transferred to the first enemy.

This effect cannot be replicated onto players (Even in PvP) or onto stun-resistant enemies such as bosses and mini-bosses as well as Furies and Drakes. 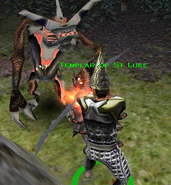 A Forest Klaw with the texture of a Hell Boar.

A Gobbot Shocker with the texture of a Kill Bot.

A Heater with the texture of a Goblin Grunt.

Copter with the texture of a Goblin Grunt 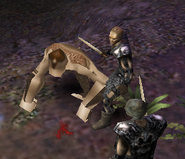 Gorack with texture of a bandit's head 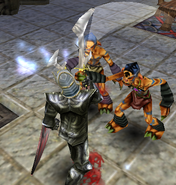 This glitch is most likely caused by database corruption or modification. The player can be venturing along and the terrain will be missing for no apparent reason.

This glitch commonly occurs wherever fairies and pixies happen to be. These include Redwood Gap, Ehb's equivalent forest, the giant waterfall in Iliarth Canyon, and Hiroth Castle's green-yard. A way to know if a fairy is killing your game is if the "Gift of Life/Mana" animation lasts for more than a second. This effect from the fairies may be related to database corruption.

Another effect is that some enemies will become invisible after it occurs.

The bug will also, if you try to exit the game, result in a freeze and crash to desktop.

The simplest way to prevent this is to download fairyfix.zip and extract fairyfix.dsres to the Resources folder in the game installation directory. This will disable the spells of fairies and pixies.

A method to fix the problem after it occurs is to reinstall the game or remove any mods which may affect the area. Savegames are not generally corrupted by this glitch. Or, use a firearm or a AoE spell to kill fairies and pixies you find.

The glitch can occur with any format the game is played in; disc or Steam.

A similar problem may occur with the Mesa Desert terrain if you used a displacer or HUB system. You need to go from Hiroth through the Mausoleum to Mesa Desert to fix this problem. The problem is characterized by incorrect character coordinates. Two characters standing nearby may have different coordinates, due to the Endless Dunes loop. Therefore, when you select one character, the terrain is there, and when the second is not.

Character with broken coordinates (via Endless Dunes loop + use HUB or displacer) doesnot snow Mesa Desert terrain.
Add a photo to this gallery 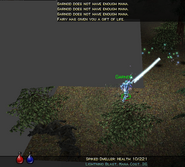 Glitch occuring in a forest in singleplayer.
Add a photo to this gallery
Retrieved from "https://dungeonsiege.fandom.com/wiki/Glitches?oldid=10118"
Community content is available under CC-BY-SA unless otherwise noted.