The Island of the Utraeans is a large island, located off of western Aranna across the water from Arhok, from which the ancient Utraeans ruled their mighty empire.

The Utraeans are an ancient race of powerful beings responsible for much of the magic in Aranna. To the early Utraean elders, comfort and security were paramount to everything else. But after millennia of supremacy, the Utraeans unwittingly engineered their own decline by falsely believing that their magic and machines made them omnipotent and by denying the destructive effect their power was having on the other island races. Like many great civilizations before them, the Utraeans ignored the dangers that arose from their suppression of the Zaurask and Hassat. This led to years of war among the island’s inhabitants.

The devastation unleashed through this conflict consumed the island, transforming once lush areas of forest and jungle into blasted, broken wastelands. The Utraean cities fell into disrepair as the leaders could no longer provide the level of comfort their citizens once enjoyed. Infighting and rebellion ensued.

Today’s Utraeans no longer dominate Aranna, or even their current island home, though they still control many powerful and magical inventions. They remain a proud, if remorseful, people.

After generations of war and conflict, the Hassat and Utraeans are all but extinct, and the Zaurask are proliferating, with their numbers far exceeding those of their enemies. It’s only a matter of time before the saurian race overwhelms the island. With their powers and machines almost completely exhausted, the Utraeans have turned to the day-to-day business of mere survival. Having never been a fertile people, and after the heavy losses sustained during the Race Wars, the Utraeans are slowly dying out. And with them dies the knowledge of, and access to, their great machines.

The Island of the Utraeans is a large island with diverse environments, ranging from warm coast to jungle and badlands. The southern side of the island have rim of warm coast with caves, palm trees and other tropical plants. The hilly coast leads upward to the steamy Dark Jungle that’s slowly grow outward to the western side of the island, overtaking the Utraean ruins.

At the western side of the island is the gloomy swamp of Fen of the Frozen. Mountain of the Dead can be found sitting outside the swamp, dotted with dead trees. Underneath the mountain is a large volcanic cavern, the Lair of Cicatrix.

The northern side is much warmer due to smaller trees and dry canyons and water channels that support harsh vegetation. The sandstone cliffs can be seen standing above a marshy beach at the bottom. The eastern side is mostly dry forest and have a massive lava cavern underneath Fortress Emarard.

Island of the Utraeans is inhabited by several races and creatures. 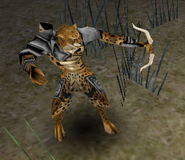 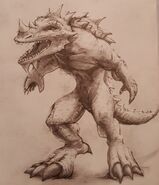 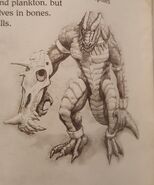 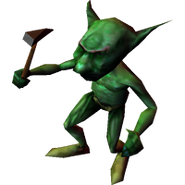 A Half-Giant
Add a photo to this gallery

Notice: The following are unlicensed references. They are not copyrighted by Square Enix Holdings Co., Ltd, but can still be considered part of the Dungeon Siege lore and are included for completeness.

Retrieved from "https://dungeonsiege.fandom.com/wiki/Island_of_the_Utraeans?oldid=11774"
Community content is available under CC-BY-SA unless otherwise noted.